Call today’s post a “two-for-one,” if you will—first, a story of a man who left the Church of Jesus Christ of Latter-day Saints for 25 years, became an outspoken anti-Mormon critic, then finally returned and, second, a guest post about how to handle “haters” (i.e. those who may be struggling with their own faith, their views of the Church, or as is usually the case, with both. Both stories/write-ups are great reminders. Enjoy.

I was just about to do a write-up about a really cool guy by the name of Steve Smith (see photo above) who joined the Mormon church several years ago then fell away for a number of years and actually became a very outspoken critic of the Church. An attorney by trade, he had the intellect and language to cause us some harm (albeit unwarranted) over the years. His story, though, wasn’t finished. Recently highlighted in LDS Living (see link to the article Here and below), it tells of the series of events, experiences, and even miracles that took part in his life and eventually brought him back to the fold (with a some help from the much-beloved living apostle, L Tom Perry, before he passed away).

This story caught my attention for

several reasons, not the least of which is that the Perrys (Elder Perry and his widow, Sister Barbara Perry) were/are good friends of my family’s. Barbara lives in the same building as my folks. These two pictures are of me and my business partner, Shayne Miles, visiting with Sister Perry in her home over Father’s Day weekend last month in Salt Lake City). Anyway, it was fun hearing of Brother Smith’s experience with Elder Perry. I was also touched by his modern-day “prodigal son” story. Here’s the link if you’d like to read the article. Click Here. It’d be well worth your time.

As I was saying, I was just about to tell you about Steve’s story when I saw a write-up by a really great blogger (and blogging expert) named Christian Miahi, who recently started following The Daily Mormon. It fits hand-in-hand with Bro. Smith’s story, sharing some great examples for how to deal with mean and angry critics, many of whom enjoy tearing others down, especially in the Mormon arena. (Mormonism seems to bring out the best and worst of folks, unfortunately; it’s sad but true and probably always will be).

Anyway. I thought the advice in Christian’s write-up was really spot-on, and an excellent reminder for yours truly as well. Personally, I haven’t seen much negative feedback (yet) on this blog. As of today’s writing, I’ve only had 161 visitors in the last couple of weeks so I’m not exactly making a dent in the universe (or Internet) yet. I’m sure it will come, though, and I have to be ready to catch myself and respond kindly. (I know myself and that isn’t always easy to do). Mr. Mihai’s advice, the writer of the blog, I think will help. 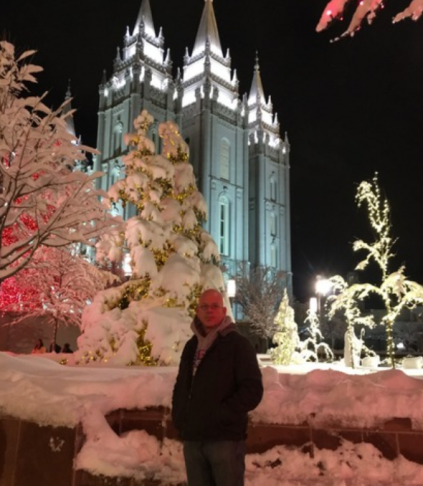 I know some people are angry and some even have a good reason sometimes. Others feel misled or mistreated. There are plenty who are just confused and don’t feel they’ve gotten good answers (though I personally believe they’re available if they keep an open mind and keep searching). Some feel the need to lash out because, while they can’t really, truthfully deny the essence of the gospel, they’ve fallen away for whatever reason (feeling offended, overwhelmed, burned-out, or whatever it might be). They’ve possibly broken covenants or become disillusioned and now feel the need to justify their actions/decisions. Others are just caught up in the lies, confusion, and misdirection that unfortunately runs pretty rampant on the Internet these days.

Mr. Mihai’s advice to “just let it go” is sage advice I believe, and not only online, but throughout all of our lives. There’s rarely a case, I believe, where it wouldn’t help. Christ himself told us to forgive (repeatedly) those who “despitefully use us.” We’re all brothers and sisters, after all. We’re all children of the same big family and it will all “come out in the wash” in the end. Ultimately, we’re family and families do bicker sometimes. But, that doesn’t mean we can’t love each other, accept each other, pray for each other, and try to understand, support and be patient with each other as much as we can.

It’s not always easy or even possible, I know, but we can try. I’ll be the first to admit that I could do better sometimes but trying I am. In the long run, you really shouldn’t try to carry the “weight of hate” on your own shoulders. It’s exhausting.

I’m breaking my own “Keep It Short” rule so I’ll wrap it up for now. Click Here to read Christian’s post, “What To Do About Haters.” Click Here to see a link to his book, The Art of Blogging. Personally,  I haven’t yet read it but I think it looks pretty good. I might have to order a copy for myself.

Thanks for your tips, my friend.

All the best, one and all.

One thought on “What To Do About Haters (Just Love ‘Em)”

“And ye shall know the truth, and the truth shall make you free….”